Update: 9/25/2016 – Chad and his son caught this Salmon at around 7:30 on Muskegon Lake just before the channel. There were a ton of boats out fishing with most jigging and some trolling. It seems that those trolling had fish on while those jigging did not. Chad was 45 feet down and using a silver red head. Picture shown below: 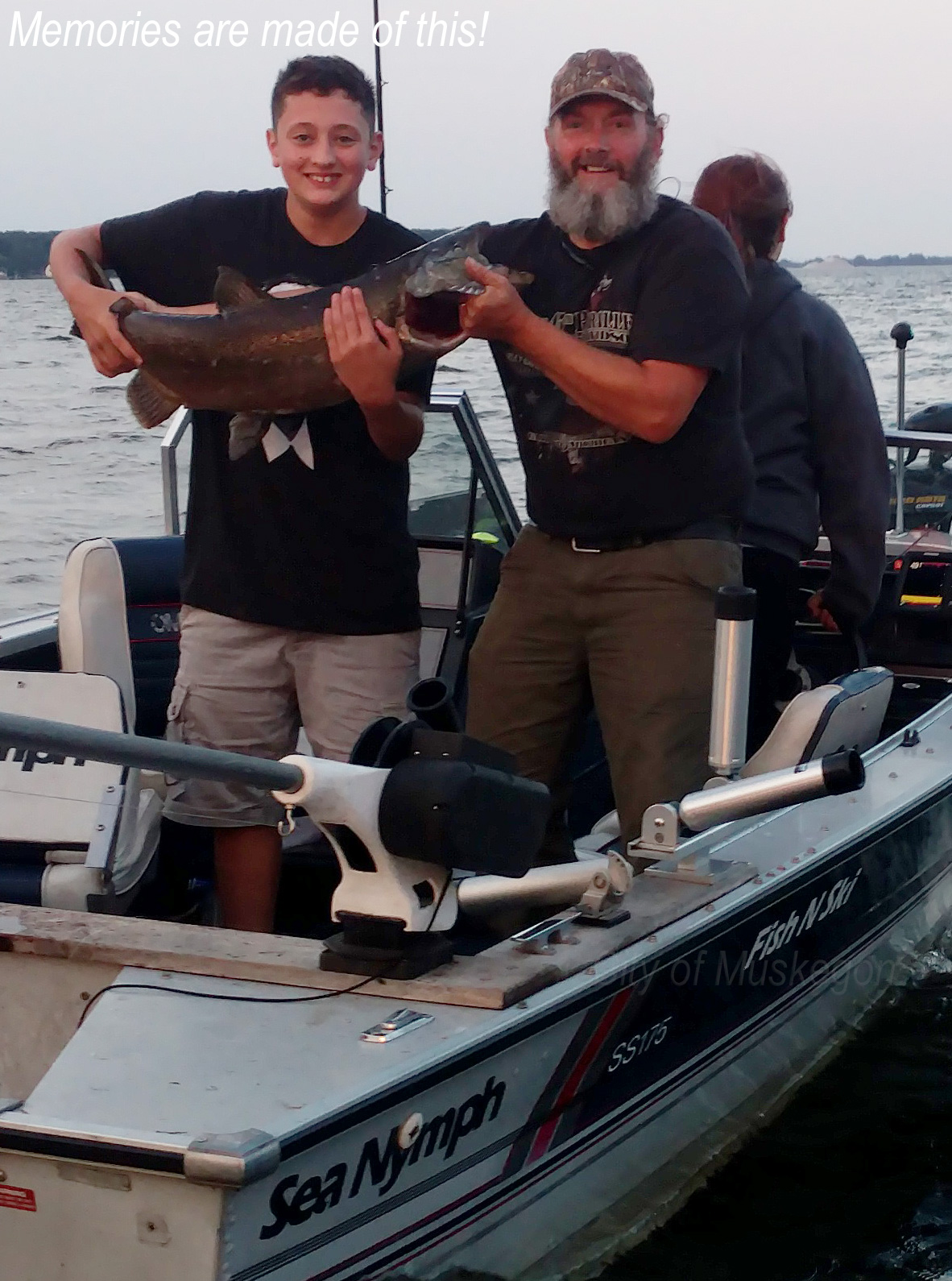 And here is another picture of a nice catch not too far away from Chad, and also trolling. Impressive! 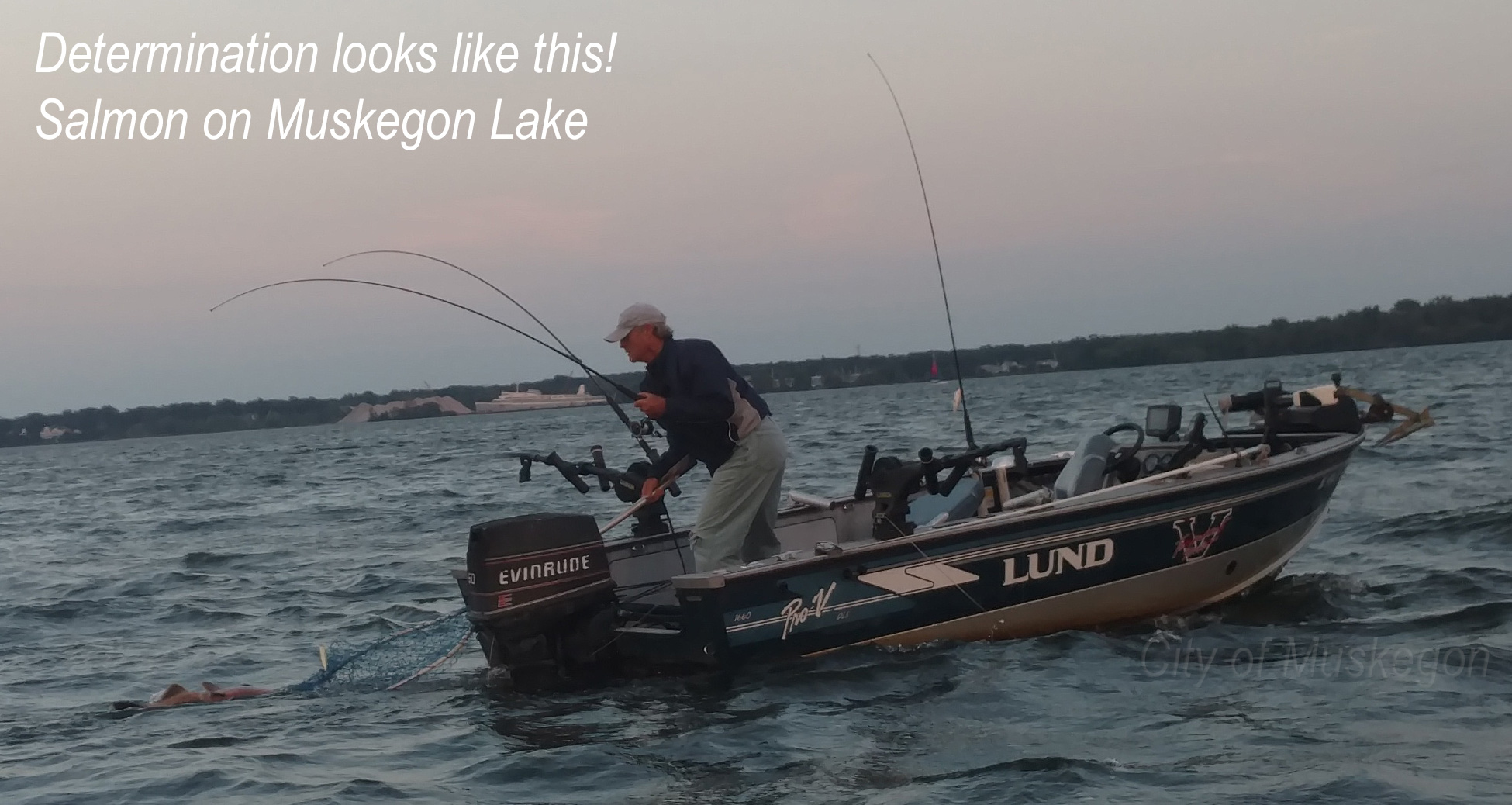 Want to catch some of the best tasting salmon you’ll ever have? We have it right here in Muskegon! People from all over come to get in on the action and are catching their limit of great lakes salmon!

Update: September 15, 2016 – Jonathan Phillips sent us a picture of this impressive catch! According to fish whisperer Vince Pannucci of North Muskegon Charters, this is a Brown Trout worthy of mounting! Caught from the Muskegon Pier, just as you enter the channel from Muskegon Lake on the Muskegon Side. Jonathan was using a silver & white Luna Jig and hooked this monster on 9/10/2016 at 7:30am. 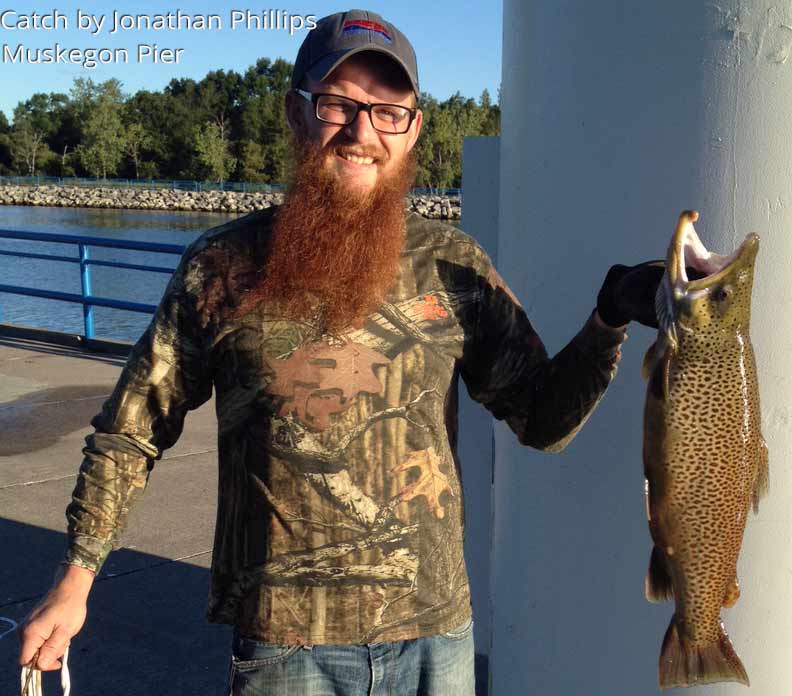 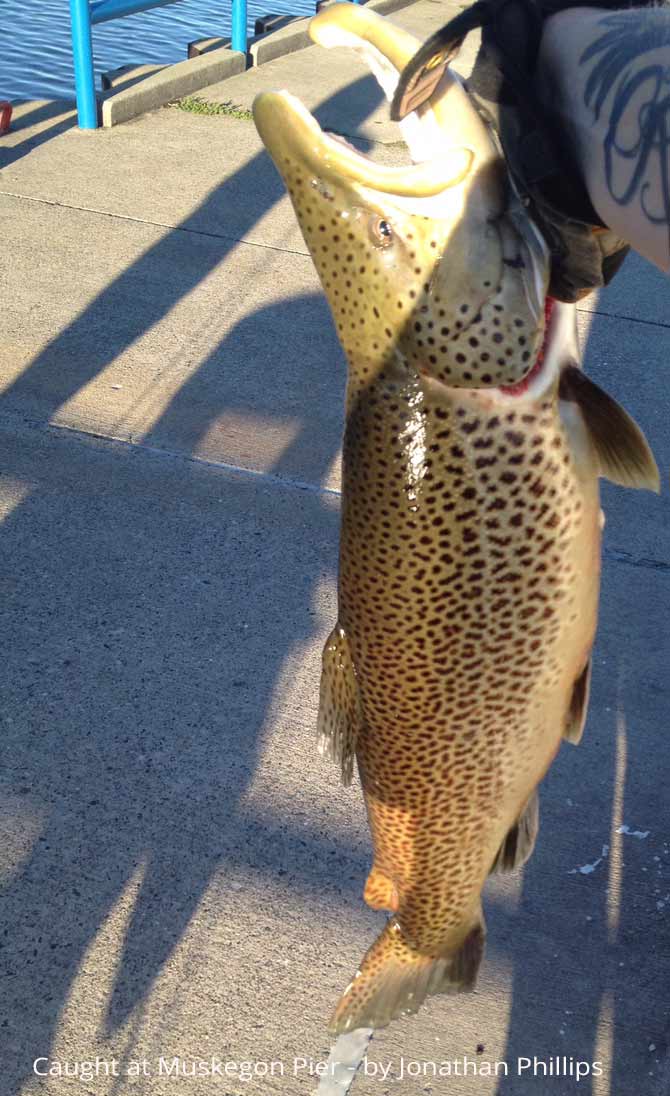 Update: August 7,2016 – Massive Salmon being caught just outside arms of Muskegon Channel. Below is a picture of Captain Kurt Hildwein who went out at 7:30pm on 8/7/2016, dropped two lines (down riggers) 50 feet back, 30 and 40 feet down using his special jplug that caught these two monsters well before sunset! His trolling speed was a bit faster than other boats and fish hit the jplug as he passed bait balls (schools of bait fish that look like a ball on the fish finder). The location (marked by “1”) was just outside the green and white lighthouse of the Muskegon Channel. Both fish were caught within 45 minutes of each other.

Picture of Coho Salmon – what you can expect! 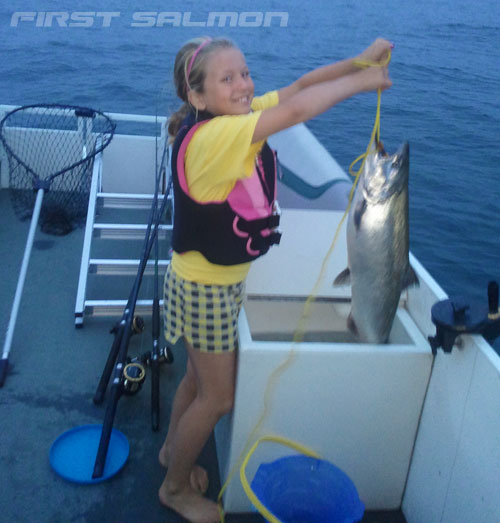 Using Neil’s Limit and Mongolian Beef (both green spoons that glow), trolling at 2.5 with down riggers set at 40 and 45 and 50 to 75 back about a quarter mile from the arms of Muskegon Channel in Lake Michigan, my daughter picked up the fighter shown in this picture. The line was screaming, fish jumped out of the water and back in to continue an incredible fight that we will never forget! Priceless!

When is the best time to fish for Salmon? It shouldn’t be for a few weeks yet, but the latest cold spell has them moving and as you can see from the pictures below, fishing has picked up. These pictures were taken only a few days ago. 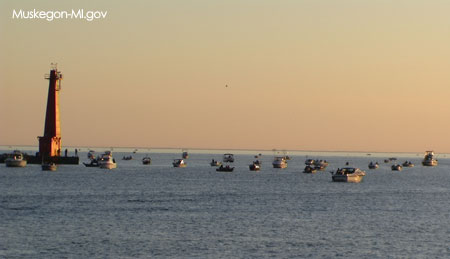 Too crowded for you? Fishing with lead core? Then head out of the pier heads and to the left like this fisherman in the picture below did – I think he has the right idea 🙂 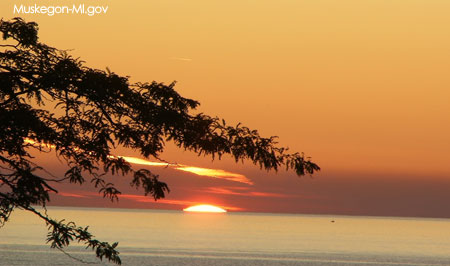 Once you’re in the water, head out to the channel and stop at the entrance to Jig for Salmon, or, use a dipsy diver or down rigger and troll through and just outside the channel arms entering Lake Michigan.

Lead core works great as well (fishing line with a lead core, the more you let out, the deeper it goes while trolling) as long as you’re not trolling near other boats – the last thing you want on your hands is your lead line tangled with others!

Don’t have a boat but still want to get in on the action? No problem, drive out to the Pere Marquette area and fish off the channel walls! 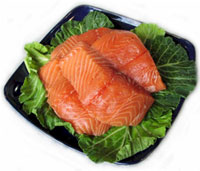 Tip — > Don’t want to cook the fish you just caught? Visit Docker’s Fish House and have Chef Scott (Does a fantastic job!) prepare your Salmon in a number of ways, including: Grilled, Sautéed, Pouched, Blackened, Cajun, Bourbon Glazed or Mango Salsa.

Chef Scott asks that you give him a two hour lead time (231) 755-0400 and fish must be cleaned before bringing them in (there is a cleaning station next to Dockers).

If you are going to freeze your Salmon, do it the right way – place them in a freezer bag filled with water; this will prevent freezer burn and works like a charm!

PS. Have some pictures of your big catch? Drop me an email (it@shorelinecity.com) with your story and pictures and I’ll do my best to get them posted!

PSS. Want to see if boats are out in the channel right now? Check out the webcam from NOAA/GLERL on our Muskegon Weather page.