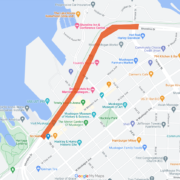 MUSKEGON, MI – The “road diet” study by the City of Muskegon on Shoreline Drive is planned for roll out in two phases.

This October, the first phase of the pilot project plans to reduce lanes for approximately six weeks on the four-lane US-31 Business Route (Shoreline Drive) through the city’s downtown waterfront.  A single lane of Shoreline Drive will be closed in each direction between 7th Street and Terrace Street so that routine road maintenance can be conducted on Shoreline Drive. Engineers will use this routine maintenance closure to collect preliminary data on the road diet.

Phase two is tentatively planned for Spring/Summer of 2023 to account for the higher traffic volumes that come with tourism and lakeshore events, according to Public Works Director Leo Evans.  Traffic control devices such as traffic cones, pavement markings, barriers and planters will temporarily eliminate one lane in each direction. The public space created by the lane reductions will be tested for bicycle use, landscaped plantings, public art and community gathering areas.

The cost of the project is approximately $100,000 with the next round of contracts being brought before the Muskegon City Commission at its Tuesday Sept. 13 meeting. With the observations and data from the two test periods, Progressive AE will provide results and recommendations to city officials in the second half of 2023. The overall goal of the project is to slow traffic, reducing the number of crashes and their severity and making the roadway safer and easier to cross from the historic downtown to the waterfront.

Any permanent reconfiguration of Shoreline Drive will require approval through the Michigan Department of Transportation (MDOT) and the Federal Highway Administration (FHWA), and may take several years for public input, design, funding and construction. Just like at the beginning of road diet study period, the city will conduct public forums to seek community input on any proposed changes to Shoreline Drive. A study preview event held July 25th was well attended.

The public can track the Shoreline Drive study at: