I was born in Muskegon and have lived in the Nims, Glenside, and Bluffton Neighborhoods.

Shortly after my graduation from college, I started my career as a police officer and was fortunate enough to be hired by the Muskegon Police Department (MPD) in 1986. I worked in several different positions during my early career at MPD including being the Neighborhood Officer in the Lakeside and Beachwood/Bluffton Neighborhoods in the late 1980s.

In 1998, I was faced with a very difficult decision but made the choice to leave police work and help my father with the family businesses. But in January 2017, I followed my heart and got back into law enforcement and was hired back with the Muskegon Police Department. Prior to becoming the Neighborhood Police Unit Sergeant, I served as the Neighborhood Officer for the Jackson Hill and Marquette Neighborhoods.

If you are currently having an emergency, please dial 911 to report your problem. 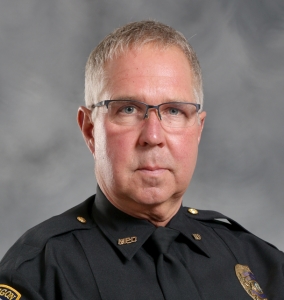